Yesterday, I visited the Philadelphia Bike Expo.  I saw two or three WCBC members there and I found much of it entertaining and interesting.  Watching the King Cage exhibitor create a bottle cage in about 45 seconds starting with a straight piece of thin steel rod and bending it by hand around various jigs to create the cage (minus the weld-on piece to attach to the bike bosses) was a big crowd attraction.

A representative from Trophy Bikes in Philadelphia gave an excellent presentation on bike security and theft recovery.  I’d like to touch on some of the highlights of his talk.

REGARDING SECURITY:  He primarily addressed long term bike security focusing on commuters and others who might park and lock bikes for hours at a time.  Quite frankly, most road riders aren’t going to carry eight pounds of u-lock and heavy-duty cable so the actual locking I’ll skip but will mention some comments he made regarding what we should lock onto and what to look for.

I am looking into a new, supposedly very strong and very light weight lock that roadies could carry for short term (grab a drink at WAWA or making a “pit stop”) lock-ups.  More to come on that.

REGARDING THEFT RECOVERY:  The speaker made some excellent points.  It’s difficult to recover stolen property if you can’t prove ownership.  He said that he’ll sometimes get a call saying that a person’s bike was stolen, and it was bought on a Thursday in 2012.  Sometimes the shop can find records and sometimes they can’t.  Sometimes they are too busy to look for a while. 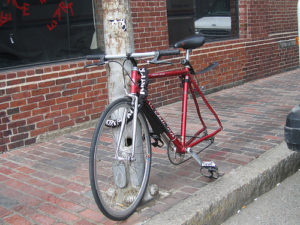 Always lock up the frame and both wheels (Ed.) 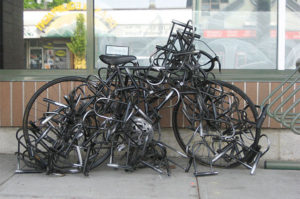 No one ever said that you can have too many locks… (Ed.)