The Honorable Jack A. Markell

We are excited to announce that our speaker for the 2020 Annual Banquet will be The Honorable Jack A. Markell.

Jack Markell served as governor of Delaware from  2009 to 2017.  During that time, he has been named “America’s most Bicycle Friendly Governor” by Bike Delaware.  Throughout his entire time in office as Governor – and in, fact, even before he became G 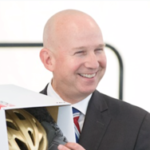 overnor – Jack Markell has led an annual “Tour de Delaware” ride, showing his commitment to cycling at a personal level.  In May 2015, Governor Markell received Delaware’s highest award for service to cycling, only ever awarded twice before – the Golden Bicycle Helmet.

In 2011, after the Walkable Bikeable Delaware initiative was passed by the Delaware General Assembly, Governor Markell recommended that $2 million be appropriated to complete the Castle Trail along the C&D Canal and an additional $5 million be appropriated  for other state cycling routes.  Also, in 2011 Governor Markell announced the First State Trails and Pathways Initiate to create a world-class interconnected network of shared-use trails and pathways for non-motorized travel and recreational opportunities for Delawareans and visitors.

In January of 2012, Governor Markell made a bold proposal in his annual State of the State speech: “[O]ne of the best ways we can improve our quality of life, and promote healthy lifestyles at the same time, is to make our state more walkable and bikeable…I am proposing that we dedicate $13 million to build miles of new and enhanced trails throughout our State.”  In June of 2012 the General Assembly approved every dollar of Governor Markell’s request. 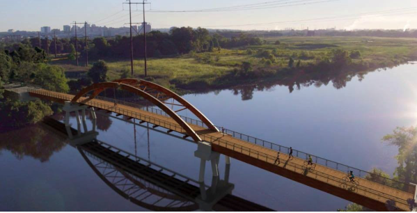 June of 2014 had Governor Markell opening one of the first trail under the First State Trails and Pathways Initiate:  the amazing scenic Gordons Pond Trail in Cape Henlopen State Park.  Upstate Markell fought for, and won, funding for the longest bike bridge in Delaware which completed the 7-mile Wilmington-New Castle Greenway.  This $23 million trail opened in September 2018 and was named in honor of the governor who has had the greatest impact on cycling in Delaware while in office – the Jack A. Markell Trail.

Downstate the Georgetown-Lewes Trail, a planned 17-mile repurposed rail-to-trail connecting these two towns will be the single longest trail in the State and was another trail system that was proposed under the Markell Administration.  Markell opened phase 1 in October of 2016, phase 2 was opened in June of 2019, with only phase 3 yet to be constructed to complete the trail.

Delaware is ranked as one of the top ten bicycle friendly states according to The League of American Bicyclists 2019 report, a ranking that Delaware has found itself  since 2012.  A large part of this prestigious ranking is due to the efforts of then Governor Jack Markell.  Once Markell’s term of office was completed, Governor Markell biked from the Pacific to the Atlantic Ocean in a 50 day cross-country ride during the summer of 2017 raising $120,000 while riding for “Motivate the First State,” a group that raises money for seven Delaware charities — YMCA of Delaware, Special Olympics of Delaware, The Boys and Girls Club of Delaware, Young Life Delaware, Fellowship of Christian Athletes Delaware and the Siegel Jewish Community Center. 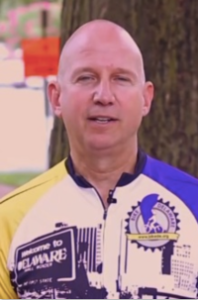 The Honorable Jack Markell will be speaking with the members of the Club about his life as a cyclist and his experiences promoting cycling in Delaware.  Please plan to attend, as this will be a dinner to remember.

We expect a capacity crowd for this event.  Seating is limited, so seats will be reserved on a first-come, first-served basis to Club members.  If you plan to attend you must send an email to Emily Ciancio at Socialchair@whiteclaybicycleclub.org with your request.  If seats are still available, you will receive a response that a seat has been reserved for you and you must bring this confirmation with to be admitted to the event.

As in the past, there will be a road ride on Sunday following the banquet and we will be reaching out to The Honorable Jack Markell in the hopes that he will join us on the ride.    The ride will be between 25-30 miles at a fit and fun conversational pace of 11-12 mph.  No invitation is needed to join this ride and details will be forthcoming and posted on the ride calendar and the web site.  We hope to show what a great group of people come out for our Club rides, so we hope you will join us.