This year’s Hawk Mountain Tour turned out to be a meandering tour onto uncharted and unplanned routes.  Read about the adventure Wally Hertler and Greta Lynne Rech embarked on over the Memorial Day Weekend!

The annual Hawk Mountain Weekend was scheduled for Memorial Day weekend, May 26-28. The start and finish was Gap, PA.

The weather forecast for Sunday, May 27 called for rain so all of the participants except for me (the ride leader) and Greta cancelled. Because I am pretty slow on my recumbent trike, I started out on Friday afternoon, May 25 to ride to Gap for an overnight stay at the Christiana Motel. Although the ride to Gap was only 29 miles it was very hot (about 95 degrees) with a strong headwind. So I stopped for refreshment at Limestone Pizza in Cochranville, before finishing up at the motel after 29 miles and 2030 ft. of climbing. The plan was to meet Greta in Gap at 8 am Saturday to ride together to the Microtel in West Hamburg where we would stay for two nights. 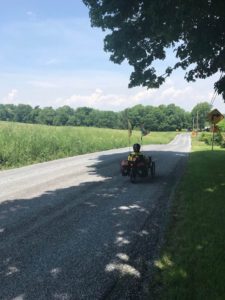 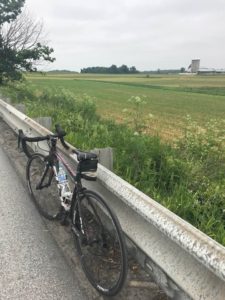 Saturday also was very hot, sunny and humid, and the route was very hilly. I was familiar with all the roads (albeit from the opposite direction) up until just east of Wernersville following a climb over South Mountain on Fritztown Road. After a refreshment stop on PA 422 we continued north on roads unfamiliar to either of us (lots of steep hills). Unfortunately the GPS file and the cue sheet were screwed up. From Brownsville Road the GPS directed us to turn left onto “Trail”.  Trail was a narrow overgrown footpath that appeared to be leading down to the Blue Marsh Lake Recreation Area and the Lake Border Trail. But, we soon encountered bollards that were too closely spaced for the trike to pass through. So, with Greta’s help, we got the trike turned around and headed back up to Brownsville Road. We made the designated turn onto County Prison Road to get to PA 183. As we climbed the hill we found signs warning not exceed 10 mph and to expect prisoners working along to road. Finally at the top of the climb we ended up at the Berks County Prison – not PA 183! We were met by armed guards at the entrance to the administrative entrance to the prison. I sensed that the guards had never seen a recumbent trike approach the prison before with two large panniers stuffed with weapons to be smuggled to inmates, and accompanied by a woman on a touring bike presumably posing as a relative of an inmate to gain access. I’m not sure that they believed my tale of following a GPS route to get to PA 183. But, they explained that we had to go back down the hill we had climbed and continue on the road we had been on to get to PA 183. Luckily we found new signs designating the roads as part of the Schuylkill River Trail (SRT). Since the John Bartram Trail (that is) a block from the Microtel is part of the SRT, we assumed that if we followed the signs we would get where we wanted to go. Alas, we reached a village where there was extensive road and bridge (over the Schuylkill River) construction and long detours. A critical road, Schuylkill Hill Road was barricaded with a chain hanging  about a foot off the road. I couldn’t lift the trike over the chain, but I was barely able to push it under the chain when I lifted the chain as far as it would go. Luckily my flags with fiberglass poles could bend without breaking. Shortly after that we encountered a sign announcing the end of the SRT. But, the road at that point was Fisher Dam Road, which turned out to be the nicest stretch of road on the whole route – along a creek, gently rising, and completely shaded. It led to the edge of West Hamburg, with downhill to the motel after 66 miles and 3864 ft. of climbing.

Sunday (the day it was supposed to rain) turned out to be cloudy with not a drop of rain. But, the forecast still called for rain so I didn’t ride at all.

Monday I headed back to Gap under cloudy skies and mist along Blue Mountain on Mountain Road and again on Fritztown Road over South Mountain. But, not a drop of rain. I reached the Christiana Motel after 61 miles and 4078 ft. of climbing.

The 30-mile ride home on Tuesday was again in the mist for the most part with 30 miles and 2045 ft. of climbing.

I am looking forward to next year’s Hawk Mountain Weekend and, perhaps, more competent weather forecasting.

Story by Wally, photographs for your viewing pleasure by Greta.

Ed. – All in all Wally traveled a total of 186 miles with 12,017 feet of ascending, which is about 65 feet ascending per mile ridden.  Greta made the trip to Hawk Mountain with Wally, but unfortunately wasn’t able to make the ride back with him.   Quite a challenging, hilly route they took over the long weekend.

Some of the sights seen… 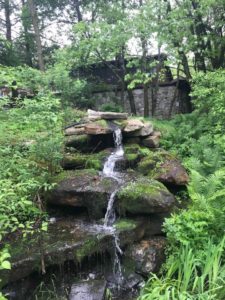 …and views from above… 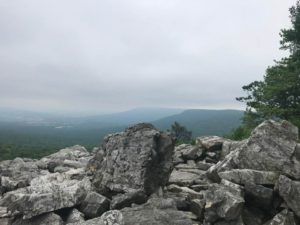 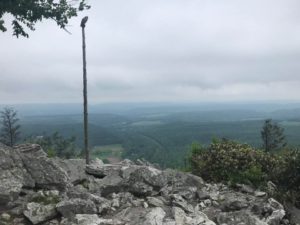 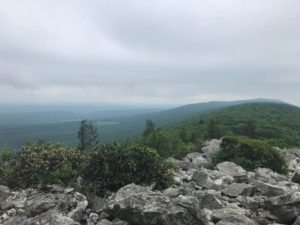 How is planning to join Wally next year?