Members of the club have been out and about meeting people, talking about cycling, and promoting the club.  What follows is a little bit about what we’ve been up to…

April 25th Barb Gallagher, JW Haupt, Carol Ireland, and Mike Katz were invited to DuPont’s Bring Your Child (and Grandchild) to Work Day at Chestnut Run Plaza.  Karl Lehman, a member of WCBC and an employee of DuPont extended the invitation to the club to participate in their Outdoor Activities program toward the end of the work day.  We met and talked with children and grandchildren about the importance of wearing a helmet, how to properly fit and wear a helmet and Barb provided a hands-on demonstration of how to breakdown a tire, remove and replace a tube, and reassemble. 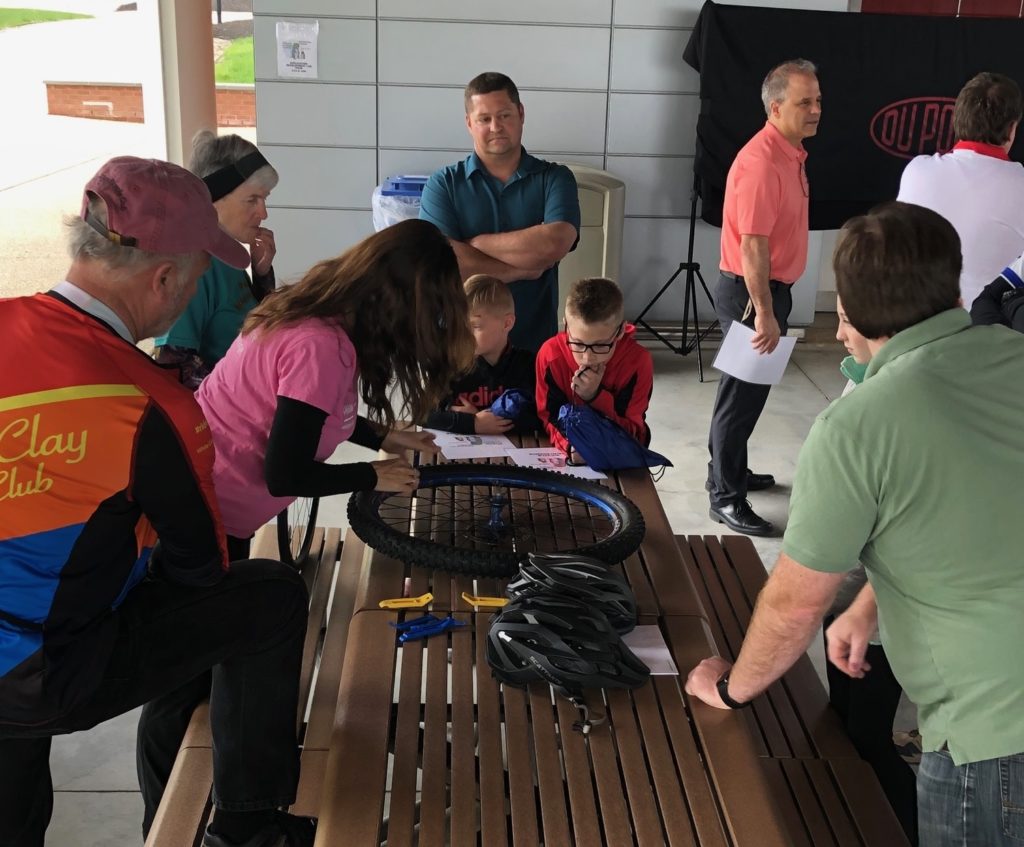 Barb Gallagher demonstrates how to “changes a flat” while children of DuPont staff look on and Carol Ireland (black headband) and JW Haupt (red hat) “supervise”.

April 27th-28th WCBC was invited to participate in REI’s 4-Day Bike Expo at the Fashion Center at Christiana Mall.  On Saturday JW Haupt, Debbie Huff started the day and Jaymi Cook and JW Haupt closed out the day by meeting with shoppers and they entered the store to discuss cycling and what the club has to offer those that ride bikes.  On Sunday Carol Bassett, Jaymi Cook, JW Haupt were there again for the morning shift, being relieved mid-day by Keith Hoke, Mike Katz, and Glenn Nichols to again meet and greet the shoppers to share information about cycling in the area and the club. 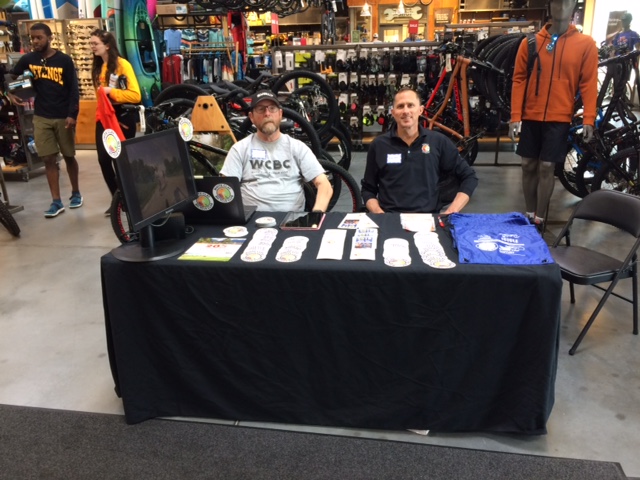 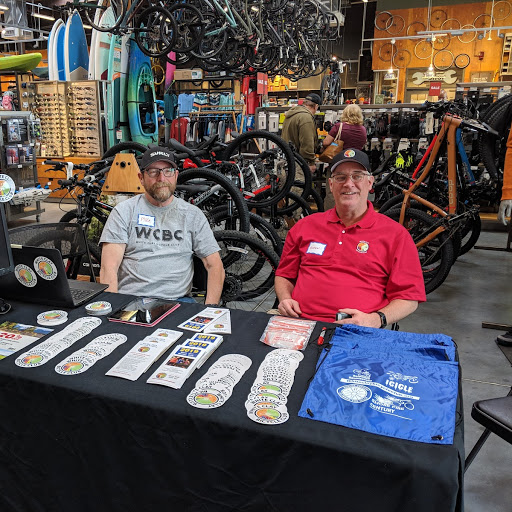 Mike Katz and Glenn Nichols at REI on behalf of WCBC.

April 30th JW Haupt represented the club at a workshop sponsored by DelDOT.  For the upcoming Walkable Bikeable Summit BikeDE hosted a group from the Dutch Cycling Embassy to speak at the Summit about developing a cycling friendly environment.  DelDOT took advantage of this by putting on a two day workshop which featured the three experts from the Netherlands; Sjors van Duren, Eric van Dijk, Wim van der Wijk.  On the 30th each of the experts took a group and visited intersections in each of the three counties to discuss how the intersection could me made safer for cyclists and pedestrians as well as motorists.  JW Haupt joined the group in Kent County where they rode about 17 miles by bike and visited about half a dozen intersections with Eric van Dijk who then outlined how each intersection would be constructed in the Netherlands to make it safer for those on bikes.  Within this groups were five DelDOT planners (one being the planning director) who were all very interested and open to design modifications that would make for safer roadways for all.   More on this in a future blog.

Eric van Dijk (blue coat and hat, orange back pack) explains the safety concerns at an intersection in Kent County.

May 2 saw Jay Gallagher, JW Haupt, and Glenn Nichols at the Walkable Bikeable Summit in Dover.  The theme “Dutch Ideas for Delaware” focused on the ‘Road to Becoming a Cycling Nation”, “Building a Solid Foundation for Cycling”, and “Key Elements of Safe Cycling”.  Speakers Sjors van Duren, Eric van Dijk, Wim van der Wijk, and Chris Bruntlett shared their thoughts and much sought after expertise on what makes roads safe for cyclists and the motoring public.  They shared with everyone how the Netherlands became the world’s No. 1 cycling country.  WCBC was one of the Principal Sponsors of the Summit again this year. 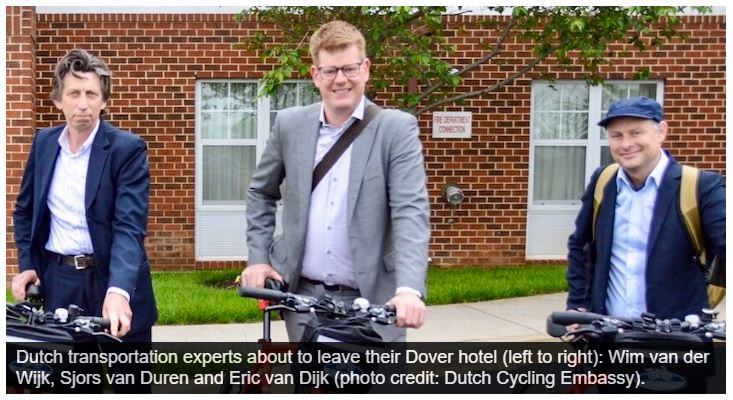 If you would be interested in volunteering for a future event and want to add your name to the list, please email me at president@whiteclaybicycleclub.org.