The WCBC VIP Night hosted by the Trek Wilmington store was a success for the Club members that came out for it.

All in all there were 40+ member in attendance.  The group had the store to themselves, with Ben Meeder (store manager) and three of his staff on hand to answer any questions we may have and ring up the purchases.  Trek offered discounts on everything in the store, which many members took advantage of to make purchases of much needed equipment and clothing.  For the members looking to expand their stable of bikes, the Trek staff provided helmets and prepared bikes for test rides.

There was plenty of socializing mixed in with the shopping as members rekindled relationships with those they haven’t seen in a while, while others took this opportunity to make new friends.  To ward off bonking while shopping Ben stocked the food table with sandwiches, wraps, salads and cookies which was a focal point for those interested in socializing.  Wine, beer and non-alcoholic drinks were on hand so shoppers didn’t run the risk of dehydrating either.

Upon arrival everyone was asked to fill out a raffle sheet and drop it in a box which Ben drew from during the evening, handing our gifts to a few lucky winners.

And at the end of the night everyone walked away with a goodie bag!

From the feedback that I received from everyone that attended, the night was a success.  I am hoping that we can schedule more events like this for the membership as well as to support of all of the local bike shops.

Thanks go out to Trek, Ben Meeder (store manager) and the staff that worked late to make this night happen!

Some pictures taken during the evening… 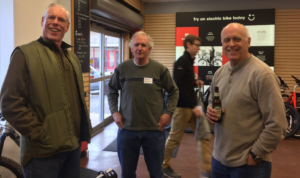 John McCormick, Brian Donovan and Rick
Bogda take a break to smile for the camera
as Ben Meeder photo bombs the shot. 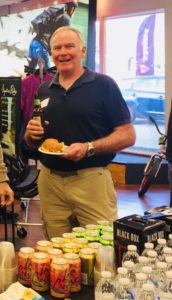 Bill Ebbott testing the food to
make sure it is safe for others. 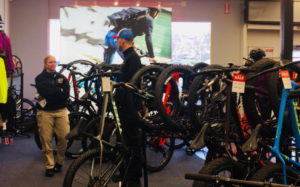 One of the Trek staff helping Laura Sullivan decide
whether there is such a thing as too many bikes. 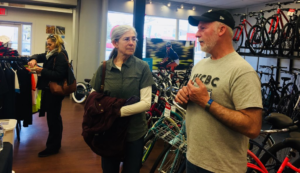 Ceci McCormick and JW Haupt chatting
it up while Mike Renner’s wife, Carina
checks out this year’s bike apparel. 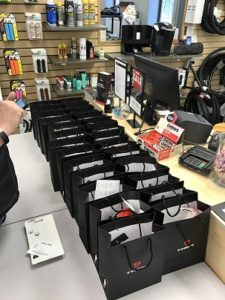 Goodie bags filled, lined up and
ready to be claimed.