WCBC has a new Executive Committee in place as of today, March 1st.

This past Saturday evening was the WCBC Annual Dinner and Business Meeting.  During the business meeting portion of the gathering, as has been done in the past, a slate of officers (Executive Committee) was presented to the membership in attendance.

There are thirteen members that sit on the Executive Committee taking on duties and responsibilities that are critical to the success of the Club.  Of the thirteen officers, seven are new to the positions, while the other six remained from the prior term.  Officers take on a minimum term of two years, with the option to be considered for an additional term each year.

The image below provides you with the 2017 and 2018 Executive Committee.

I would like to thank those that have served and that just stepped down from their roles – Joe Bockrath, Mike Kealey, Jaymi Cook, Dianne Leipold, Kevin Tumey and Charlie Johnston.  Without your help over the past year, the Club would not have been as successful as it was.

I would also like to congratulate the new members stepping into the vacated positions – Keith Hoke, Dan Durishan, Carol Bassett, Barb Gallagher, Glenn Nichols, Rob Highley and Emily Ciancio.  With your help I hope that this year will be just as successful, if not more than last!

If you happen to meet up with any of the past officers please thank them for their services to the Club; as for the newly elected officers, I hope that you will thank them too and give them your support in the coming year.

I’m excited about what the coming year has in store for the Club! 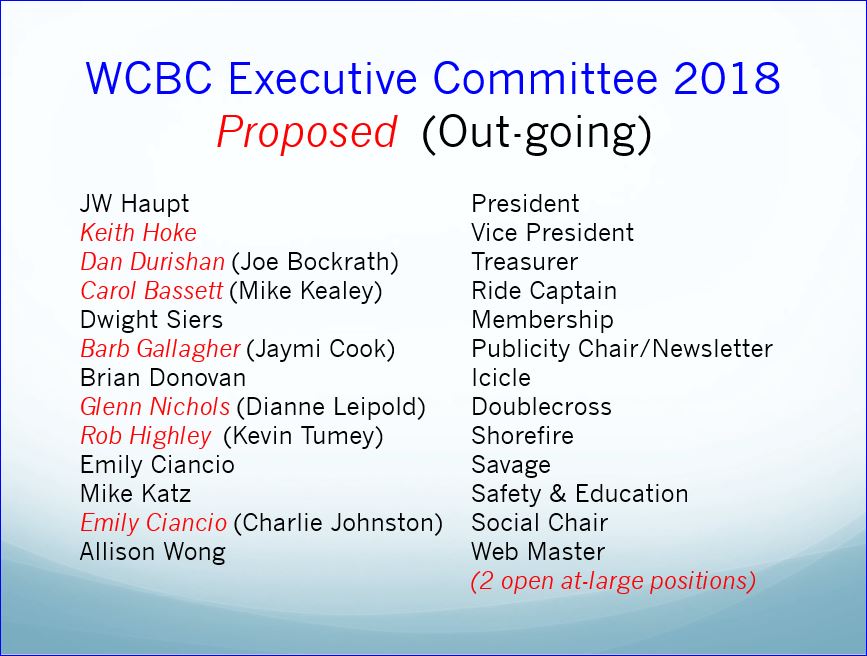